KELLY LORENNIJ The Waan Aelon in Majel (WAM) vocational and life skills program is set to graduate a batch of trainees next month. During their open house last Thursday, WAM showcased the handcrafted work of past and present trainees in full display including coconut graters, tables, pounders and riwut-style canoes. WAM Director Alson Kelen was […] 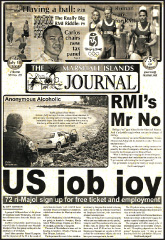 Waan Aelon in Majel (Canoes of the Marshall Islands/WAM) started a six-month training for youth Monday with 20 trainees ready to go. The two-part training includes Life Skills classes in the morning and vocational training in the afternoon. Classes include basic English, math, and computer, which are all taught by Berlyann Labija. In previous years […]

The RMI government took an unprecedented step to strengthen its partnership with civil society last week with the signing of a new Partnership Framework Agreement with the Marshall Islands Council of Non-Government Organizations (MICNGOs). The new partnership agreement supports President Hilda Heine’s Agenda 2020, which aims to improve social, environmental, and economic well-being in the […]

The National Nuclear Commission again has three members, following the recent appointment of Dr. Holly Barker as a commissioner with the RMI agency. Barker was sworn in during a ceremony at the Cabinet office in Majuro last month. She has a long-association with the Marshall Islands that started when she was a Peace Corps Volunteer […]

HILARY HOSIA The official handover of a new crane truck from the Embassy of Japan to Waan Aelon in Majol (Canoes of the Marshall Islands) Friday revealed a positive aspect about WAM: exemplary maintenance. In his remarks, Japan Ambassador Hideyuki Mitsuoka said he was amazed at the state and condition of the vocational training center […]

GIFF JOHNSON A series of photo shoot opportunities brought a Hawaii-based professional photographer to Majuro last month. Following a visit to the College of Micronesia in Pohnpei to open an exhibit of photographs of Micronesia, Floyd Takeuchi spent several days in Majuro taking photos of three seemingly unconnected subjects: actress and student Save Filolita Filemoni, […]

KELLY LORENNIJ Two United World College (UWC) scholarships have been awarded to sophomore Hannah Reimers from Majuro Cooperative School and Berlin Philippo, who is in her junior year at Assumption High School. Reimers will join Bertine Lakjohn who is currently finishing her first year at UWC International School of Asia, Karuizawa (ISAK) in Japan. ISAK […]