Thousands of youth set to arrive

By Journal on February 19, 2016 Jude Samson, Marshall Islands history, United Church of Christ, Youth Back In The Day 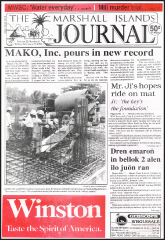 By Journal on January 22, 2016 Majuro, MALGov, Marshall Islands history Back In The Day 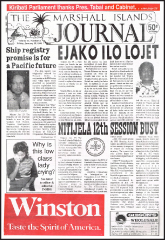 Journal 1/24/1975 P1 Nakayama’s address underlines major problems facing Micronesia “What are we going to do for the people of Micronesia?” said Senate President Tosiwo Nakayama in a dramatic departure from the Kennedy standard phrasing. The question was asked during the opening week of the newly convened Sixth Congress of Micronesia in Saipan. Nakayama added […] 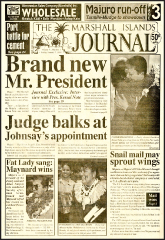 Journal 1/4/1974 P2 Hey! Majuro’s gone one — a real 24-hour place. Name’s Zackius’ Restaurant. Like 3am? We’re open. For the guys at the hospital, the police on patrol, the graveyard shit at the power plant and little hungry you, after late night powering, partying or dancing. P2 Micronesian float in Rose Bowl parade Micronesia […] 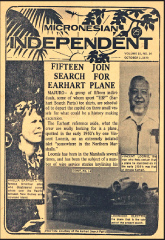 Journal 10/12/1979 P1 Fifteen join search for Earhart plane A group of 15 individuals, some of whom support “ESP” (Earhart Search Party) tee shirts, are scheduled to depart the capital on three small vessels for what could be a history-making excursion. The Earhart reference aside, what the crew is really looking for is a plane, […]

Jacklick, Kelen and the ‘quake

By Journal on October 23, 2015 Marshall Islands history, Micronesian Independent Back In The Day 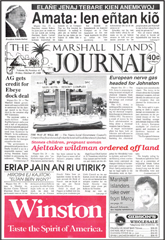 Journal 10/22/1974 P1 Tribute to insincerity She slipped by quietly and without much to-do but she did come at least. It was National Port Day, a day celebrated September 30. Supposed to be a recognition of the fact that commercial ocean ports in the Trust Territory play a vital role in Micronesia’s economy, the day […]

By Journal on October 9, 2015 Marshall Islands history Back In The Day 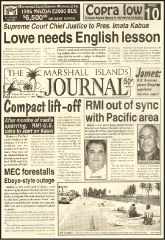 Journal 10/8/1976 P3 Ponape prepares for new Micro capital A Special Joint Task Force was created in Ponape to study and make recommendations as to where the site of the capital of Micronesia should be located. P6 Betel nut banned in US, Guam The traffic of betel nuts in the US is prohibited, according to […]

By Journal on October 1, 2015 Marshall Islands history Back In The Day 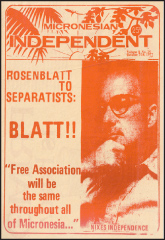 Journal 10/7/1977 P1 Rosenblatt rules out independence for Micronesia US chief negotiator Peter S. Rosenblatt ruled out the possibility of more political fragmentation — and independence for any part of the territory — in a recent radio interview here. P3 Lady mechanic honored The Ponape District Legislature adopted a resolution congratulating Mershina Likor of Net […]