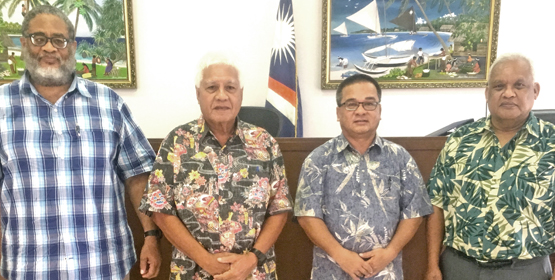 Judges in the court room: District Court Presiding Judge Milton Zackios (second from left) retired from the bench in late December after 15 years as a judge. With him on his last day at work, was, from left: High Court Chief Justice Carl Ingram, Zackios, District Court Judge Tarry Paul, and High Court Judge Witten […]

An administration of oath ceremony was held January 26 in the Cabinet conference room to formally swear in the three members of the Marshall Islands National Nuclear Commission. As provided in the law passed by the Nitijelã last year establishing the Commission, its primary duty is to develop a detailed strategy and plan of action […]

The new members of the President Hilda Heine’s Cabinet took the oath of office Monday during a swearing-in ceremony administered by District Court Presiding Judge Milton Zackios at the International Conference Center. The ceremony took place following President Heine’s submission of nominations to Speaker Kenneth Kedi for appointment as Ministers of the Cabinet, pursuant to […]