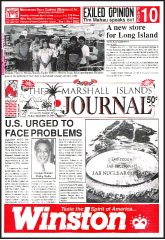 The Enewetak Ujelang Local Government celebrated and blessed its new excavator in a ceremony in Majuro last week. It was purchased with a US Department of Interior grant and will ultimately be located at Enewetak to support improvement work for the Enewetak dock and other projects. Until it can find transportation to the northern atoll, […]

By Journal on December 6, 2019 Enewetak, Majuro, police, Ronglap Back In The Day 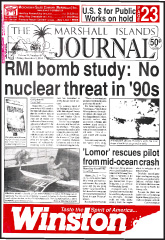 Journal 12/8/1982 P1 High spirits The Rongelap airfield was opened Monday by an Airline of the Marshall Islands flight. Rongelap people prepared a welcome including dancing. P1 Power soon Testing on the new power plant is continuing December 8. The number one generator should produce power this week, according to one of the construction managers. […] 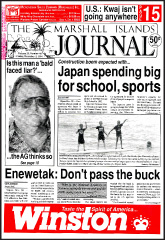 Journal 11/30/1982 P2 Outer islands update The Lae airfield should be ready by Friday. The first landing on Rongelap should be next Monday. The next atoll after Lae to get an airfield should be Ujae.  P2 Seventh Day Adventist honor roll first quarter Linda Laupepa, Jelina Rilometo, Ginger Alik, Joann Tadeo, Vivanna Velasco, Linda Allen, […]

Nuclear legacy gets US focus

KELLY LORENNIJ Among the important topics discussed by Pacific Island Forum leaders in Tuvalu last month was the issue of nuclear contamination in the region, a long-standing concern stated in previous Forum meetings and official communique statements, as well as health and security issues related to World War II wrecks and unexploded ordnance. This year […]

GIFF JOHNSON After decades of no one outside the Marshall Islands paying attention to the nuclear waste storage facility known as the Runit Dome, it is increasingly in the international spotlight with attention like never before. Following UN Secretary General Antonio Guterres’ comments of concern last month about possible leakage of radioactivity from the Runit […]

RMI angry at US decisions 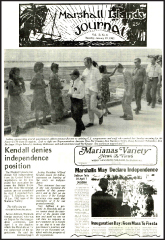 Journal 1/19/1982 P6 Rep Seiberling hopes for Compact in ’83 US Representative John Seiberling told the welcoming crowd at the Majuro airport that 1982 is too early for completion of a Compact of Free Association. He added that he hoped the matter would be placed on the 1983 congressional agenda. Seiberling is chairman of the […]

By Journal on July 20, 2018 Daus Ittu, Enewetak, Moses Abraham Back In The Day 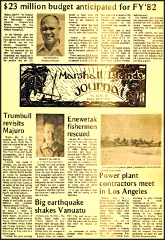 Journal 7/17/1981 P1 Enewetak fishermen rescued Two men from Enewetak who were lost at sea in their 13-foot motor boat since June 9 were found and rescued July 9 by the MV Eagle Arrow, about 600 miles west northwest of Enewetak. Both men, Daus Ittu, 29, and Moses Abraham, 30, appeared to be in good […]