Red Cross back in training mode

Now that the outer islands travel advisory related to dengue fever has been lifted, the Marshall Islands Red Cross Society has resumed first aid training on remote islands. “We are ready to get back into First Aid/CPR and Emergency Response Training for outer island communities,” said Red Cross spokesperson Roger Muller. “We are very grateful to be working […]

One of Air Marshall Islands Dornier aircraft suffered an engine problem at Aur Atoll requiring an engine change. In just three days, AMI engineers had the problem diagnosed, an engine dispatched and installed on Aur, and the plane back in the air. AMI’s ability to get the Dornier back into service despite its grounding on […]

Team Lae men continued their reign as the top team in the RMI with their fifth consecutive championship in the BOMI 18th Ralik Ratak Shootout Basketball Tournament that wrapped up Saturday in Majuro. 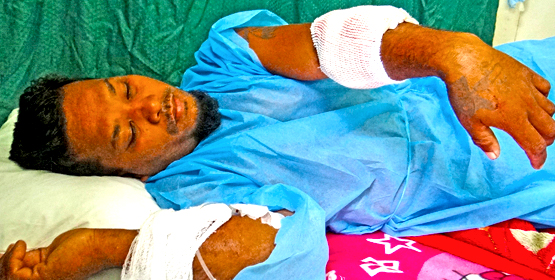 HILARY HOSIA A man from Tobal, Aur braved a shark in its habitat, surviving an attack Saturday. Romie Carland, 37, was spear fishing inside what he described as a “school of fish” off the coast of Tobal when he saw blood flowing from his right arm. While Romie was registering how he was bleeding, a […]

HILARY HOSIA Like many years past, it rained cats and dogs hours before the 17th Bank of Marshall Islands Ralik Ratak Shootout kicked off last Friday at the Staff Sergeant Solomon Sam Sports Center at the College of Marshall Islands. Following four days of back-to-back action, Lae placed itself on top of the food chain […]

Distribution of drought emergency supplemental food to the outer islands starts this week, with the MV Kwajalein being loaded at Uliga Dock for a Thursday departure to 10 atolls and two single islands. A total of 4,747 people living on remote islands will receive supplemental food supplies paid for by the US Agency for International […]