GIFF JOHNSON The RMI shutdown of passenger arrival on airplanes has stranded a few people in various locations. But for the 55,000 residents of the RMI, the border lockdown is a welcome development when viewing the ongoing and worsening Covid-19 coronavirus crisis in many nations. Last year’s ban on travel to outer islands because of […]

GIFF JOHNSON   The Marshall Islands announced this week it had one “person under investigation” (PUI) for the coronavirus Covid-19, while two states in the Federated States of Micronesia announced they had three PUIs in isolation — all four were awaiting off-island laboratory testing to determine if they have the Covid-19 virus. The person in […] 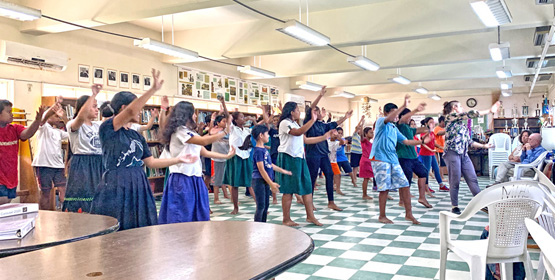 JACK NIEDENTHAL This year’s play, Carousel, a Youth Bridge Global Production directed by RMI citizen Professor Andrew Garrod, is a demanding piece of theater. What makes this play especially difficult is the wide range of challenging dance sequences. I heard Professor Garrod remark to the cast one day that Carousel has more complicated and intricate […]

GIFF JOHNSON In response to the first laboratory-confirmed case of dengue fever in Majuro last Friday, the Ministry of Health and Human Services late Friday curtailed passenger travel to remote outer islands. The government is attempting to prevent the spread of the virus to outer islands by halting air and ship passenger travel. “The goal […]

GIFF JOHNSON The first suspected cases of dengue fever were reported late last week in Majuro, as the outbreak on Ebeye Island continues. Majuro numbers continued to increased this week. Ebeye was the focus last week of a major mosquito spraying and cleanup program to eradicate mosquito-breeding areas. Health authorities said this week the count […]

GIFF JOHNSON The Marshall Islands put domestic travel restrictions into force last week in the wake of an outbreak of dengue fever on Ebeye Island. One dengue case was confirmed the first week of August, with 21 additional cases listed as “probable.” Health authorities confirmed the dengue as “Type 3.” By early this week, the […]

KELLY LORENNIJ Canvasback’s Opthalmology and Retinal Mission has seen over 250 patients since it opened clinic July 15. The eye team has successfully conducted over 60 eye surgeries. Patients are given primary and routine eye care, which means that while the team diagnoses and treats patients they also see to prescriptions for people who just […] 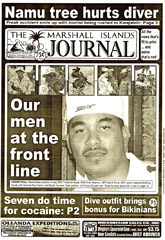 Journal 12/11/1981 P1 Bank opens Monday The Marshall Islands First Commecial Bank, Ltd. will open its door Monday December 13, according to Clarence Tan, president. The 11:30am ceremony will be at the bank’s offices below the Hotel Majuro. The whole areas has been drastically cleaned up in the past few weeks. P3 Enna G brings […]