By Journal on August 10, 2018 bowl, bowling, Krystle Enterprise, Linda Muller, Phillip Muller Back In The Day 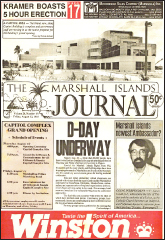 Journal 8/14/1981 P1 Kabua back from Washington President Amata Kabua arrived back from his official visit to the United States this morning aboard a US Air Force C-141 aircraft. He was escorted here by Kwajalein Missile Range Commander, Col. Peter Wittereid. Lined up at the terminal were many top government officials who made sure there […]

Voters want change and new directions for the RMI, two winning candidates told the Journal this week. “The people have spoken and they want change,” said incumbent Majuro Senator David Kramer, who is being returned to office with 2,477 domestic votes in the Majuro electorate. “They want a new government and that is evidenced by […] 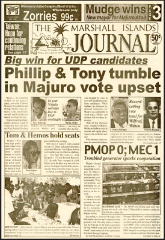 Journal 11/12/1976 P8 Worms eradicated The local Agriculture Department here surely deserves a note of congratulations — thanks to the quick work of district agriculturalist Liki Labi, a serious plague of worms found in a local hydroponic station was taken care of with a suitable pesticide. According to our source, the worms were reported one […]