By Journal on June 2, 2017 James Matayoshi, Jerry Kramer, Mike Senko Back In The Day 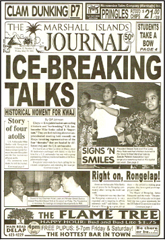 Journal 5/30/1975 P10 With the magic rectangle here, can the flag be far behind? Suddenly it’s not the same old Majuro. There has a been a dramatic change both in what people do and talk about. The most apparent change is noted on Sundays when a drive down the district center road uncovers crowd of […]

HILARY HOSIA Seven months ago, Humanity First of the Marshall Islands’ then-President Falah Shams and Rongelap Atoll Local Government Mayor James Matayoshi signed an agreement to use a New Zealand grant to provide solar energy for 10 Rongelap homes in Majuro. As part of the agreement, RALGov provided a portion of money to join with […]

HILARY HOSIA More than a hundred years ago, a man from a small Indian town in Qadian foretold of a new Islamic movement that would reach the farthest corners of the world. The man, known worldwide as Mirza Ghulam Ahmad, later founded the Ahmadiyya Muslim Community, an Islamic group dedicated to peace and humanitarian services. […]

A harvest of 500 pounds of “moi” (Pacific Threatfin) fish in Majuro Wednesday morning highlighted the progress this fish farming business is making to become commercially viable. “This batch is just the beginning,” said Rongelap Mayor James Matayoshi, who has spearheaded the fish farming from pilot project to commercial rollout over the past five years. […]

Mejatto to get new classrooms

Thirty-year-old Mejatto Public Elementary is to have new classrooms thanks to a grant from Japan’s Grassroots grants program. At a ceremony at the Japan Embassy last Thursday, Japan Ambassador Hideyuki Mi