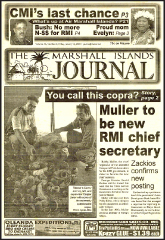 Journal 1/6/1982 P1 Majuro prepared but no waves Thousands of people left the capital early New Year’s morning, looking for shelter in Laura as wave threat warnings were being broadcast over radio station WSZO.

Bravo: They got it wrong 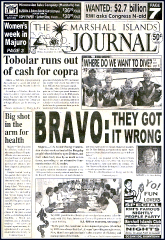 Journal 9/17/1976 P1 The foot in the door At the heart of the Marshalls’ separation movement is Amata Kabua. Forty-seven years old, senior Senator in the Congress of Micronesia, successful businessman and son of one of the Marshalls’ paramount traditional leaders, Amata Kabua is a power in the Marshalls. He has served as Chairman of […]

By Journal on August 19, 2016 NCT, nuclear, Nuclear Claims Tribunal, Paul Irujiman Back In The Day 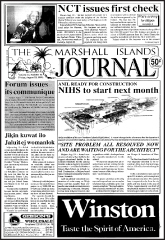 Journal 8/27/1976 P6 What They’ve Said by Mary Browning In the view of Donald F. McHenry, the problem of finding a proper political status for Micronesia has been essentially an unsuccessful effort to reconcile conflicting American and Micronesian interests. McHenry’s exploration of the problem has been published as Micronesia: Trust Betrayed, by the Carnegie Endowment […] 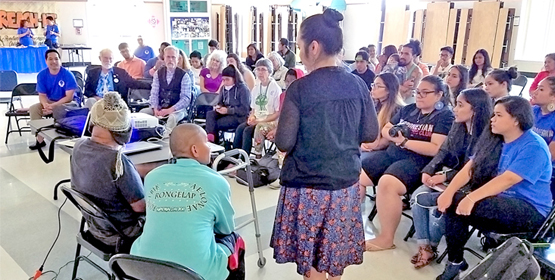 The Marshallese community in Oregon hosted a RMI-US Nuclear Legacy Summit over the Memorial Day weekend as part of its annual RMI Constitution Day celebrations. The Summit brought together Marshallese and American, elders and youth, activists and researchers, survivors and students to engage in a dialogue on the devastating consequences of nuclear testing. Beyond dialogue, […]

The International Court of Justice (ICJ) wrapped up oral arguments last Wednesday in the preliminary phase of the nuclear disarmament cases brought by the Marshall Islands against India, Pakistan and the United Kingdom. The hearings, which took place at the ICJ from 7-16 March, were the first contentious cases on nuclear disarmament ever heard at […]

The Marshall Islands gained global headlines this week as the government’s cases against India, Pakistan and the United Kingdom were launched at the International Court of Justice in The Hague. In addition to Dutch attorney Phon van den Biesen representing the RMI government before the court, former Foreign Minister Tony deBrum spoke to the court, […]

The Marshall Islands is set to take action to revive its nuclear compensation claims with the US government and to seek global recognition of March 1 as an international day of remembrance for victims of nuclear testing programs. These were key points highlighted by President Hilda Heine at Tuesday’s Nuclear Survivors Remembrance Day event at […]