WILMER JOEL The global pandemic known as the coronavirus has made many countries across the world go into lockdown, closing down their schools. More than ever before, the government of the Marshall Islands including Ministry Of Health and Ministry of Education have taken lot of measures to help prevent the virus from coming to the […]

Career Day a hit at MIHS

WILMER JOEL Education week went well for Marshall Islands High School (MIHS), with a Career Day the highlight. For Career Day, the school invited government departments and non-government organizations to showcase their responsibilities to the students — so that students may learn from them, and get inspiration to one day replace them in their seat. […] 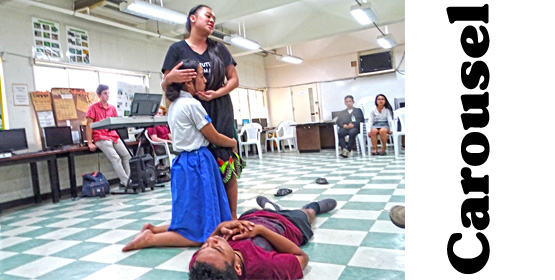 WILMER JOEL With just over four weeks till the opening night at ICC, the cast of the Youth Bridge Global production of the musical Carousel are going full throttle in their rehearsals at the Marshall Island High School Library. Under the direction of Music Director Jacob Donohue, the cast is starting to memorize the songs […] 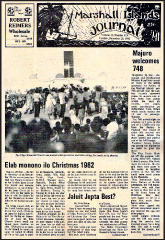 KELLY LORENNIJ Marshall Islands High School closed this year’s graduation season with 199 fresh graduates, symbolizing the end of an important chapter in their lives, but one they will never forget. As top students Billhorn Neamon and Bertiako Sorimle, valedictorian and salutatorian respectively, stressed, “Once a gecko, always a gecko.” Health Minister Kalani Kaneko accomplished […] 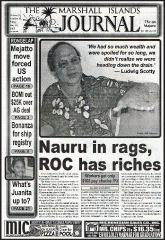 Journal 5/18/1982 P1 Marshalls asks Compact level funding for ’83 The Marshall Islands delegation headed by Finance Minister Atjang Paul appeared Thursday before a subcommittee of the US Senate Committee on Appropriations to present the 1983 budget for the RMI. The budget presented was based on the Compact of Free Association and it is considerably […]

Journal 4/20/1982 P3 Ebeye group in Majuro A group from the Ebeye Catholic Women’s Club is presently in Majuro visiting the Majuro Catholic Women’s Club. The group is headed by Fr. Leonard Hacker, SJ. P7 Classifieds ARE YOU AFRAID of people like Ron Reagan, Haig (the man, not the drink!) and Thatcher? If so join […] 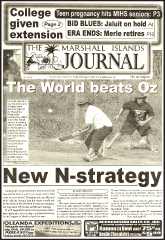 Journal 2/1/1982 P1 Burnett confirmed, Nitijela in recess awaiting budget Nitijela January 29 unanimously approved the nomination of Harold W. Burnett to be the first Chief Justice of the Marshall Islands Supreme Court. The parliament then recessed subject to the call of the Speaker to await the FY1983 budget which the Cabinet will submit when […]

HILARY HOSIA For the past many years, Marshall Islands High School has operated a practicum course for qualified seniors, where students join the normal nine-to-five workforce whether it’s at Majuro hospital, Robert Reimers Enterprises or Majuro Do It Best. But for instructor Utoane Teniu and her 13 sewing students, one seamstress shop wasn’t enough — […]