HILARY HOSIA Who’s ready for gold? They are. The Marshall Islands Wrestling team is sending an elite team of wrestlers to compete in the 2018 Micronesian Games in Yap in the Federated States of Micronesia this week. The eight competitors including coaches all have a record of winning their matches. “Before we take off, we […]

HILARY HOSIA What happened in Majuro early Wednesday morning by the airport water reservoir is the kind of unexpected accident that would show in one of Ripley’s Believe it or Not episodes. Here’s what happened: A National Telecommunication Authority cellular phone tower fell onto a moving flatbed vehicle around 1am Wednesday morning across from the […] 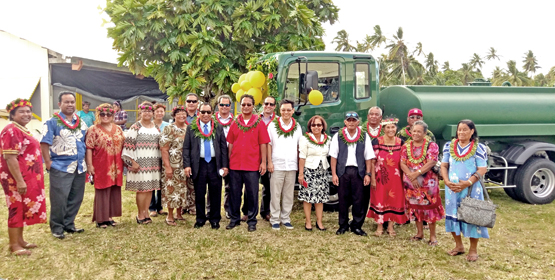 MIMRA praised as model in region

The Marshall Islands Marine Resources Authority (MIMRA) was singled out for praise by a new book that provides an overview of Pacific fisheries management. The nearly 700-page book says MIMRA is one of the few fisheries departments in the island region that produces an annual report, which is essential for both promoting fisheries and being […]

Cable could return by January 18

GIFF JOHNSON Just days after submarine cable repair crew provided a January 7 target date for completion of work last week Wednesday, the date was delayed again — to January 18 — when the search for the damage spot took longer than anticipated. As a result of more delays in getting the cable back into […]

The Marshall Islands has joined with 46 nations pledging to have all their energy needs generated by renewable sources by 2050. This was among developments at the climate summit held last week in Morocco attended by President Hilda Heine, Minister in Assistance Mattlan Zackhras and a large delegation of RMI representatives. The 47 nations are […]

GIFF JOHNSON The world of streaming movies, Facebook videos and Skype conversations will grind mostly to a halt for nine days at the end of October when NTA shifts Internet and phone links from the highly-reliable fiber optic cable to satellites. The “bandwidth” available to RMI customers for Internet and international calling will shrink from […]