The Marshall Islands government had the most spending questioned since 2010 by auditors in the FY2014 audit issued to Nitijela last month. Auditors also listed 13 problem areas, 11 of which were reported in previous year audits and not fixed. In 2012, Finance had reduced questioned spending to a record low of $35,857. It doubled […]

Postal voting on the way out?

Two pieces of legislation introduced to Nitijela would, if passed, amend the RMI election law to eliminate voting by postal ballots for Marshallese who live off-shore and determine leave of absence dates for RMI government employees who stand for election. Bill No. 6 focuses on restructuring the postal ballot section of the law so that […]

Passports out of action 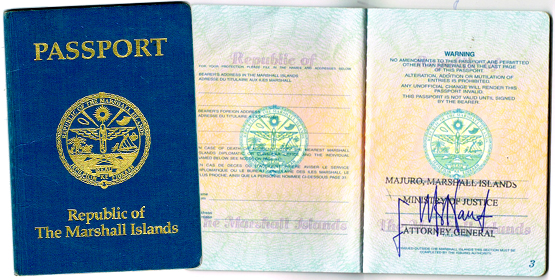 The Marshall Islands entered its third week with no ability to produce regular passports this week. It has been issuing temporary travel documents that US Homeland Security approved for use about a week after the initial problem with the RMI Attorney General’s office passport machine developed in mid-February. At Nitijela Monday, Ujae Senator Atbi Riklon […]

The Nitijela held a five-day induction seminar last week that Speaker Kenneth Kedi said was “a platform” for Nitijela members to “contribute to the national dialog on key development issues and sustainable development for the Marshall Islands.” The program was co-sponsored by the Pacific Community, United Nations Development Program, UN Women’s Program, UN Human Rights, […]

CJ Bird told to fly away

By Journal on February 26, 2016 Nitijela, old news stories, Philip Bird Back In The Day 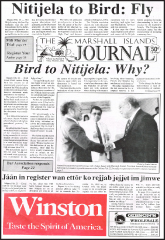 Journal 2/28/1975 P6 What They’ve Said by Mary Browning This we lift unabashedly from “Periscope,” Newsweek, October 14, 1974: “Although the US formally opposes nuclear tests in the atmosphere, French planes ferrying material to test in the skies over the Pacific earlier this year were allowed to make refueling stops at Majuro airport in the […]

GIFF JOHNSON Copra makers who have been waiting months for payment received some good news this week: The government released subsidy funding last week to Tobolar so it can clear off an estimated $300,000 backlog in payments due to copra makers. New R&D Minister Alfred Alfred, Jr. said the Cabinet worked with the Ministry of […]

President Dr. Hilda Heine addressed the nation last week as Nitijela reconvened, emphasizing the need for government offices to improve services to the public and promising that a constitutional convention will be held in the near future. This was the new President’s first opportunity to speak in Nitijela since being sworn in the previous week. […]

Nitijela Vote of No Confidence motion

ISAAC MARTY The resumption of Nitijela’s 37th Constitutional Regular Session Monday was cut short due to the introduction of a Vote of No Confidence (VONC) motion presented by opposition senators. Ebon Senator John Silk introduced the motion. The VONC document was pre-filed last week Thursday, which prompted Speaker Kenneth Kedi to recall Nitijela to receive […]

New President Casten Nemra highlighted key issues facing the country, focusing on the need to improve services to the public during his inauguration speech following his swearing in ceremony with his Cabinet Monday at Nitijela. He also declared that his first overseas trip will be to Washington, DC, and noted that he has already requested […]