KELLY LORENNIJ Majuro’s favorite Music Men, Jobod Silk and Duke Gaston, are set to train with Shakespeare & Company this summer in Lenox, Massachusetts courtesy of the non-profit. Youth Bridge Global organization, which is raising funds and support for scholarships for both actors worth over $5,000 for board and tuition. Theatre itself is an art […]

KELLY LORENNIJ Seasoned theatergoers counted down the last few seconds to lights out during Tuesday night’s show at the International Conference Center where family, friends and fans of The Music Man occupied more than half the room. The musical, deemed a “masterpiece” in theatre, is a romantic comedy with book, music and lyrics by Meredith […] 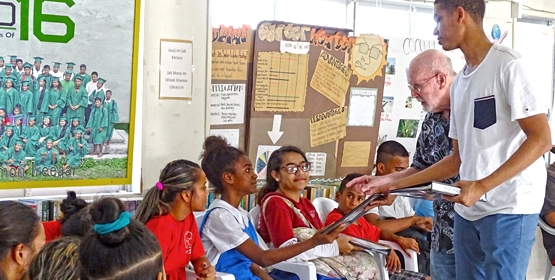 The countdown for Youth Bridge Global’s production of the Music Man is underway with seven weeks left on the clock. That said, Professor Andrew Garrod and Dartmouth team of Summer Cody and Tyler Malbareaux announced who made what role following the first day of practice last week at Marshall Islands High School.

PAMELA PERKINS Grease opened on stage at the ICC Monday evening to a near capacity crowd with the 1958 Rydell High School yearbook reminding us that the story represents a high school of 60 years past. Photos of the period heart throbs include Ricky Nelson, Sal Mineo, Rock Hudson, Pat Boone, Doris Day, and Sandra […]

Oklahoma! Magical night at the ICC

Rebecca Lathrop Two hundred and fifty folk were transported to the farming plains of Oklahoma in the 1940s Tuesday night, laughing and tapping their toes to the magic that was happening on stage. The lights came up and Aunt Eller, played by Carnie Reimers, began churning butter. Her green bonnet in place and her stage […]